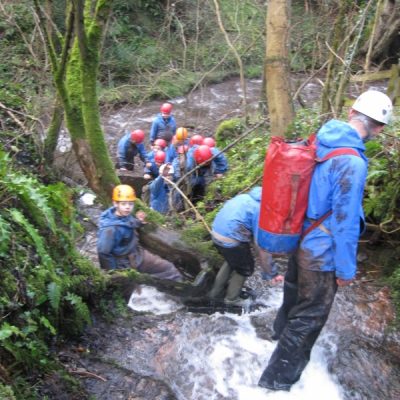 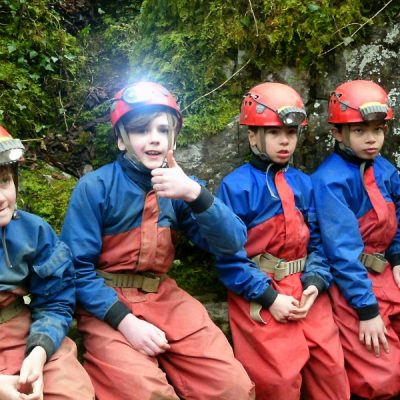 The journey to Wales was as smooth and swift as we could have hoped for and before we had grown bored of the endless cries of ‘are we nearly there yet?’ punctuating the general buzz of excitement, we were suddenly at our beautiful destination. The luggage was stacked on a trailer and taken up to Plas Pencelli while the year sixes walked up the hill to their destination.

Upon arrival, children were introduced to their leaders and set their first insurmountable task: to make their beds. As they went up to their rooms, the corridors were flooded with puzzled children exchanging tips on getting duvets inside covers and sharing the mysteries of bedding organisation. We were assured that the girls managed to complete this task with a reasonable amount of time. The boys? Well… at 7.30pm, they’ve still not all met entirely with success.

After making their own sandwiches for lunch, the children learned they would also be expected to complete a variety of chores. Then we met outside for our first activity – the Adventure Trail.  Suited and booted in Plas Pencelli’s finest (waterproof overalls, wellies and a helmet), they certainly looked the part. The trail started gently, dodging branches, leaping over fences and under fallen trees. But then we descended down into the stream. Wellies were filled as the journey took them up a waterfall, through an ancient Ash Tree and some brave souls even crawled through a drain against the current. It did help wash off the mud from the mudslide, but the end result was a group of very soggy children …who still decided the most appropriate mode of transport down the hill to the centre was the roly poly.

After showers, hot chocolate and completing our Records of Achievements, dinner (pizza and wedges) was next – always a popular event! Finally, we all met up for the last activity of the evening: orienteering.  In pairs, using torches and a map to navigate, the children had to find as many markers on a map as possible – a keen competitive spirit had been ignited.

Despite the rain and chilly temperatures, the day has ended with the children settling into their new routines and challenging themselves. We are all looking forward to the adventures awaiting us tomorrow.

The running theme for day 1: Excitement and mud.

“My favourite bit was probably getting to know each other and the leaders and the adventure walk!” Tyra’s concluding comments on the day.

With oreinteering being his best part of the day, Aaron exclaimed, “My favourite part was trying to find all the nature and trying to win!”

Erin C was very adamant about her favourite bit so far: “Sliding down the mud slide, basically getting muddy!”

Despite the rain and chilly temperatures, the day has ended with the children settling into their new routines and challenging themselves. We are all looking forward to the adventures awaiting us tomorrow.

The excited buzz in the boy’s accommodation began early, as the staff were dragged into consciousness at about 6:30am –far earlier than anticipated. This excitement turned into dismay, however, as another feature of Northbourne residentials came into play – the room inspections. To score a perfect 5/5, not a fibre of dust should be visible and the room should be spotless and fully hoovered. More fundamental issues came into play, however, as some of the boys were heading into unknown territory with tasks such as making their beds and folding their clothes (and finding toothbrushes).

Breakfast (bacon, as well as cereals, toast and hash brown) was a hit and soon the children were completing their chores, making their lunch and getting themselves set for their first activities of the day. Green Group were layering up in their full-bodied caving suits, testing out helmets and sizing up their wellies (though this was done yesterday, there were still a number of children with sizes as much as 4 sizes too big!) getting set for caving which saw them conquer challenges including the legendary letterbox and toilet.

Blue and yellow groups took to the canal and had an awesome day canoeing.  Mr. Shaughnessy thought Mrs. Cummins was a little too relaxed when their journeys met in the middle – she seemed to be enjoying being paddled along by a couple of hard-working instructors!  Mrs. Bowtell’s group headed to the quarry for a day of bouldering, climbing and abseiling – some very impressive skills on show from so many children.

Hot chocolate awaited us on return as everyone completed their Records of Achievement and dinner (with pancakes and ice cream for dessert!) helped build up energy for evening’s activity: The Dingle Descent.

Roped to their team mates with only the person at the front and back having head-torches, we descended a muddy hill into the stream. Moving slowly using team work, they steadily overcame the challenge and were rewarded with the warmth of their beds.  Quiet descended far quicker than during the previous evening…

The second day contained many more challenges but every child has completed every one so far! No one is left behind and the children are beginning to really look out for one another – onwards to D

Zac on caving: “I quite liked the letter box – I didn’t think I would fit in, but I did and I felt really good after doing it.”

Joshua W on our evening activity: “Dingle decent was really good because of the team building exercises and we had to trust each other. I quite liked the bits where you had to climb under or over because you needed the precision to get over fallen tree quickly or you would be pulled down”

Running theme for Day 2: Falling over and rain!

The adventure continues! Morning was far quieter in both the boys and girls areas of the house, yet not a single complaint was made when the 7:15 wake-up call was given. The first 5 marks out of 5 on the room inspection was posted (a boys’ room, incidentally – Mr Shaughnessy, despite his best efforts, could not find a single fault!) Breakfast, always an exciting time of the day, consisted of hash browns, beans and bacon – certainly proving a popular combination.

Green team were canoeing, and what an adventure it was …getting ready! Four layers on top (including our newly borrowed Plas Pencelli fleeces), two pairs of trousers, two pairs of thick socks, waterproof trousers, waterproof top, a pair of wellies, a buoyancy aid, a helmet, a spare jumper in a barrel and a packed lunch. This took a while. But once we were set, we walked down the hill and stood by the canal to learn our newest skills and into the canoe we jumped. Needless to say, there were a number of rather confused canoe-rs going around in circles until we finally cracked it! Onward we went, under bridges, over aquaducts and even through seemingly endless tunnel. Navigating this should have been easy as the path was straight, but as you couldn’t see anything, there was a lot of bumping from side to side.

The rain let up just in time for us to have lunch, then continued relentlessly as we made our way back to our vessels. We met Red team who smiled and waved at us as we went past them, but what we didn’t know is that they’d left behind a little surprise for us at our final destination. When we finished our journey, the children removed the canoes and propped them up on the bank. They were then informed that these needed to be carried up a short hill to the trailer. They approached this with good humour, but clearly upon their descent earlier in the day, Red team had left us a mudslide to climb. It was hard going, and by the time they had finished they had warmed themselves through. How could they cool themselves down, one might ask? The obvious solution presented itself as a brisk dip in the canal. After this madness, Green team cranked on the minibus heating and made their ways back home.

The other groups also enjoyed an adventurous day…Blue group headed off to the most amazing, most challenging cave Mr. S has ever dragged himself through.  Commando crawling was the only way to get through large parts of the cave and, already soaked through thanks to the most hideous rain imaginable, the resultant combination of mud, clay and wet made for some challenges removing the all-in-one caving suits as we emerged into the daylight.  Yellow group had a stunning day climbing in the Gower Peninsula – although they faced a bit of a journey, the pay-off of stunning views and the chance to scramble, climb and abseil against the backdrop of some stunning scenery was a once-in-a-lifetime opportunity and one which allowed lots of the group to develop some really advanced climbing skills.

The evening activity after dinner was the scavenger hunt, but this was preceded by a hugely anticipated visit to the little Plas Pencelli shop. Many of you should look forward to welcoming small cuddly sheep and red dragons home to your households come Friday.

Running theme for Day 3: It would have to be the amazing sights and wildlife. And the canal ducks (“Quacky, Toby and co.”)!

“It was really fun because I got to learn new skills such as how to steer a boat, but I wasn’t very good at it. But I was good at rowing the boat – I got told at least seven times to stop paddling too hard!” Jake

The final morning was the quietest yet. Not a peep until wake up time. Room inspections garnered a 5/5 from a girl’s room for the first time and scrambled egg was another hit.

Green and Blue groups were climbing and, due to weather conditions, we made our way to a coast just outside of Swansea. As the children took in the beautiful scenery, the instructor Josie informed them of their next skill they would be learning before climbing. The horrified looks gave way to giggles and the children wandered in the bushes before resuming their journey to the beach.

Climbing challenged many children in ways that they had never been at all and the sight of the almost sheer rock face initially put many off. However, with encouragement and innate skill that many never knew they had, all twenty-two year sixes managed to improve upon their first attempts.

The other half of the group journeyed to their cave – English translation being Stone Church.  Pupils were amazed that the wet, damp, dank cave – complete with hibernating bats – was used as an actual place of worship in the past…and marvelled that St. Peters was easier for us to get to for our regular services.  Mrs. Cummins and Mrs. Bowtell both relished their first caving experiences and all of the pupils taking part returned to the centre with stories of the cheese-press…which is this year’s version of the letterbox (and so much harder…)

Returning to the centre, the children had dinner and quickly joined in with the final activity of the day – Problem-solving! Tired brains swiftly woke up as they had just 8 minutes to tackle each of the five different tasks: gutter ball, protecting eggs, mine-sweeping etc.

Finally, packing this evening – another of the hardest challenges faced so far.  We apologise in advance for the state of suitcases as your children return, as we haven’t yet had chance to teach folding and sorting skills…and we still have one wet activity to go…

On a final practical note, we aim to leave Plas Pencelli tomorrow between 2:30 and 3pm; we will Parentmail as soon as we can after we have left.  The postcode for the centre is LD3 7LX, so please use Googlemaps or another mapping app to have a check on how long our journey might take.  All being well, we should be back at Northbourne between 5:30 and 6pm.  We’re all looking forward to seeing you!

This site may use third party cookies: Find out more.